Opening for Sweden`s Funk Rockers the Electric Boys, shows just how far Durham`s very own Edenthorn have come in the last year or so. That their star is very much in the ascendance is down to their ability to craft some seriously classy songs and perform them in such an impressive way.  Power and especially Hearts Still Beating from their latest release, Exist, show a genuine grasp of melody and melodrama delivered by the rich tones of Kyle Tague that mark Edenthorn down as ones to watch.

Their last show in Newcastle saw the Electric Boys looking back, celebrating the 25th anniversary of their second album, the wonderfully and very aptly titled Groovus Maximus but this year they had their sights set firmly on the future.

With a decent chunk of the set taken up with songs from their latest album, The Ghost Ward Diaries, it`s clear that the Electric Boys are on something of a creative roll.  Hangover in Hannover is the perfect opener, big, bold and brassy whereas the more reflective Gone, Gone, Gone, a song to a lost friend, shows there`s more to them than Funky swagger.

Of course, the Funk element drills deep into their soul and Groovus Maximus, Electrified, Knee Deep In You and Rags To Riches Rocked hard and grooved deep. Angel In An Armoured Suit featured a glorious, sleazy Aerosmith-esq riff while Mary In The Mystery World brought a cool shot of Psychedelia to the show perfectly matching singer, Conny Bloom`s, flamboyant image.

You Spark My Heart`s soaring chorus was as uplifting as its name suggests but it was left to Rock club floor filler All Lips `n` Hips to seal another sizzling, high voltage night.

Review and Photos By Mick Burgess 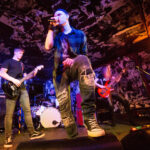